Press Release: Was your Indian grandfather a Prisoner of War in Europe?

A historian in South West England is trying to track down relatives of soldiers of the British Indian Army held as Prisoners of War in Germany, Italy and France during the Second World War.  Around 15,000 Indians – mostly captured in Greece and North Africa – were held for up to 5 years, and almost none of their stories are known.

Dr Ghee Bowman, author of the acclaimed book The Indian Contingent: The Forgotten Muslim Soldiers of Dunkirk, became interested in these neglected stories when he was working on his first book. “I grew up in the 60s and 70s, with Colditz on TV, The Great  Escape at the cinema, so I thought that POW stories were all about posh Englishmen with moustaches and vaulting horses. I didn’t realise that there were Indians at Colditz, that there were thousands of Indian soldiers who were made to work for the Germans, and that  – amazingly – the largest successful escape by any POWs in the war was a group of Indians. There’s so much to discover and so much to tell”. 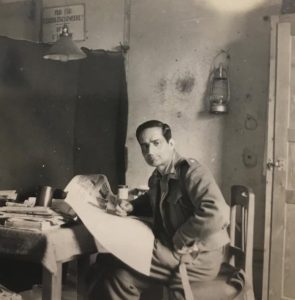 Bowman has been researching in archives in Britain and Europe, but is also keen to hear from families in the UK, South Asia or elsewhere in the world. “Those 15,000 POWs must have thousands of descendants alive today, some of them with stories of hardship and escape, endurance, collaboration, maybe even romance. I’d love to hear from them “.

Among the 15,000 Indian POWs in Europe were Muslims, Sikhs, Hindus and Gurkhas.

Hardip Singh of the Punjab regiment was captured at Benghazi in Libya in 1942. He spent over a year in POW camps in Italy until the Italians surrendered, when he took to the hills with some comrades. They joined a band of Italian partisans resisting the Germans, until eventually the Allied front line caught up with them.

Buland Khan, on the other hand, was a mess servant in a mule transport  company in France in 1940 – his job was to cook for and serve the officers. He was captured in June 1940, and spent the next few years in various camps until he landed in a camp in Rennes,  in north east France. He escaped from there with the help of local French civilians, and was whisked across the channel at midnight from Brittany to Dartmouth in a boat full of US flying crew.

Lamsdorf in Silesia was home to thousands of Indian POWs, with many hundreds of Indians among them. Noor Hassan Khan was part of the staff of a canteen for the men. As the Russians advanced through Poland in the early part of 1945, the prisoners were forced into a long and dangerous march westwards, remembered to this day by prisoners’ families in New Zealand, South African and Canada. But are they also remembered in India, Pakistan, Nepal or the South Asian diaspora?

“There are so many incredible stories hidden away, almost forgotten. Stories of murder, of escape and hiding in the hills or the farmhouses for months, of sitting it out, waiting, of collaboration, romance & babies. The panoply of life was represented in those camps –  prayer, illness and suffering, learning and enduring, and the lighter side like camp newspapers and sports days, dramatic societies, Red Cross parcels delivering cigarettes and treats. I want to compile a definitive list of the names of all the Indians and Gurkhas in camps, and challenge the narrative that says ‘Indians weren’t there, Indians don’t care about the Second World War’. I’m looking for people who remember they were there- maybe there’s some old letters, a photo from a camp, or just something your granddad used to tell you. As a public historian, my job is to find these stories and share them with the world”.

If you have any stories, you can find Dr Ghee Bowman on twitter  @GheeBowman or by emailing G.Bowman2@exeter.ac.uk

Ghee Bowman’s previous book The Indian Contingent: the Forgotten Muslim Soldiers of Dunkirk was published in the UK by The History Press in May 2020, and by Pan Macmillan in India in September 2021.

It tells the story of Force K6, the Indian mule drivers who were part of the British Army in France at the start of the war.  After Dunkirk, most of them came to Britain where they stayed until early 1944. There will be a memorial to their memory unveiled in Kingussie in the Scottish Highlands in 2022. About 320 of their number were taken prisoner and spent up to 5 years in German POW camps. Some of them joined the 950 regiment of the German Army, recruited exclusively from Indian POWs.

The book has sold well, briefly being an Amazon no 1 bestseller.  Radio 4’s Mishal Hussain described the book as ‘An incredible and  important story, finally being told’.