The 25th Company were somewhat later escaping to the coast than 32nd Company. There was an initial flurry of activity on 10 May, while the rest of the BEF left their carefully prepared defence lines and advanced into Belgium. The next ten days were spent looking after their animals and waiting at their camp at the Dillies’ farm while history was made all around them. Hurricanes of the RAF’s 87 Squadron came and went from the airfield next door, and German aircraft bombed regularly.

On 15 May Akbar returned from England, and the following day Captain Thompson, who had been covering Akbar’s two troops, left to return to the Reinforcement Unit. On 19 May, the day that Guderian’s reconnaissance units reached the English Channel near Abbeville, six Messerschmitts flew over the camp and bombed the airfield. Three men, including Warrant Officer Sardar Ali, one of the company’s star hockey players, experienced a near miss when a bomb dropped and splashed them with mud. Miraculously this was the closest that any men of 25th Company came to death during that fateful month. Finally, on the evening of 20 May, they received their marching orders from Major Barrington, in command of the Cypriot mule company. They loaded their carts with all the equipment, food and forage they could carry, leaving behind some hay, straw and live sheep, and set off westwards by night along the Belgian border, reaching their destination at Forêt de Nieppe in the middle of the night, having marched thirty-five miles. From there they continued northwards towards the coast, ‘fighting their way home to Blighty’, as Churchill put it. The confusion continued, however – with no reliable radio or telephone, their officers had repeatedly to seek out staff officers to receive clear information and orders, while being bombed by the Luftwaffe ‘like a rat in a cage with a cat inside it’. In the early hours of 22 May they halted near Cassel at a place called Winnezeele, where Major Wainwright reported ‘men tired but cheerful’ and there they had a ‘good night’s rest’.

One of the men enjoying that respite was Jemadar Nizam Din. This gap-toothed, craggy-faced VCO was a soldier with long experience on the North West Frontier, and would turn out to be one of the few men to stay with Force K6 until their return to India in 1944. By then he had risen through the ranks and was a lieutenant. Such were the opportunities the war afforded – for a man from Rawalakot in Kashmir this would have been unthinkable before 1939. But Nizam Din worked hard and displayed great qualities – he was recommended for a Mention

in Dispatches for ‘setting an outstanding example’ in the period before Dunkirk. Major Wainwright’s recommendation continues: ‘He showed leadership and devotion to duty of a very high order and was untiring in his efforts to maintain the morale and discipline of the Indian ranks. He was always ready to accept any mission however arduous or dangerous.’

He had acted with coolness in organising and leading the men in very trying circumstances. The fact that 25th Company (and the other units) stayed together so well was largely due to VCOs like Nizam Din.

During the stay at Winnezeele they took the opportunity to send Akbar with their lorries back to the farm at Marquette, where they picked up some useful supplies, including a number of sheep. A platoon of the Worcestershire Regiment found them a few days later:

When we arrived at Cassel we found the RIASC muleteers just moving out to Dunkerque and the Chateau grounds we took over from them had been bombed or shelled and 18 horses and mules killed. The English NCO in charge also handed over a meal they had cooked of chicken and bread and butter which was very acceptable as we had not had anything to eat, except a few biscuits, for two days.

It was not until Sunday 26th that Major Wainwright, having driven seventy-one miles around the tightening triangular pocket that contained the BEF and the French First Army, finally received clear orders to march to the coast. The mules were to be set free, and all equipment to be left behind, except their personal equipment and six days’ rations. They marched at half-past ten, 300 Indians including Akbar, and twenty-three Britishers, including the RASC drivers. Along with them was their agent de liaison, a new man called Caspar, who would have had mixed feelings about leaving his country at its time of need.

On the night of the 27th, according to their war diary:

Dunkerque was now in ruins, burning furiously and being bombed incessantly. Captain Cole returned to unit by midnight 27/28 with orders to march immediately to Bray Dunes via Teteghem and Zuydcoote.

0200 Coy passed Teteghem & met staff officer at junction of road Dunkerque–Fournes who ordered unit to jettison packs and blankets. Men donned greatcoats but lost the remainder of their kit. The unit was directed towards Fournes & finally on to sand dunes near Fort des Dunes. No one could be found to issue orders & CO decided to halt until daylight to avoid losing contact.

And so, in the small hours of 28 May, they reached that fateful beach, still together, still a unit, with all their men intact, but with only the clothes they stood up in. 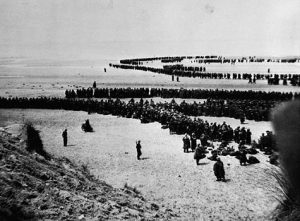 As dawn broke at Fort des Dunes, Wainwright set off for information, and Akbar found that ‘the situation all along the beaches of Dunkirk was pathetic. One saw our defeated army in thousands in utter confusion. It was a most depressing sight to see thousands of unarmed soldiers miserably wet, hungry and thirsty and in despair.’ For experienced professional officers like Akbar, Cole and Wainwright this must have been an awful sight, and one that ran the risk of taking away the men’s faith in the Raj. The war diary records: ‘0800 About 2000 British troops were wandering about in vicinity of Casino & beaches. Later this number increased to over 10,000 … Driver Green RASC was reported missing.’

Fort des Dunes was a major French fortification four miles east of the town of Dunkirk and would prove to be one of the last French forts to surrender, on 3 June. Although it may have seemed to Wainwright and Akbar that discipline was breaking down, in fact the chain of command was intact, the narrowing perimeter was being held by British and French troops, and the evacuation was being carefully managed by the Royal Navy. As the day wore on, it became clear that boarding a ship would take time, and the men moved gradually nearer to the beach itself, having been bombed by the Luftwaffe again. At six o’clock Wainwright and Akbar were told to march to the East Mole, a jetee or breakwater nearly a mile long, made of open concrete piles with a wooden walkway, not intended as a place for mooring. With so much of the harbour out of action, the beachmasters were forced to improvise, and this mole and its western counterpart would prove crucial in getting away so many soldiers. It also figured prominently in Christopher Nolan’s 2017 film Dunkirk.

The march to the mole was led by Akbar, as Cole and Wainwright were searching for a lorry to carry the sick men. One can only imagine how the 25th Company’s march looked to the Tommies and the French civilians around them: 300 mule drivers, grooms and farriers, carrying their maulvi and the other sick men, in an orderly column through the jumble of vehicles and abandoned equipment along the sands in the gathering twilight, en route from the Pothwar plateau to Salisbury Plain.

The march continued in the evening light, but as they neared the mole, they were forced to split up due to pressure of numbers. The war diary does not mention the long wait, but the fact that it took them eight hours to cover about five miles shows the slowness of the process. Luckily rain fell in the afternoon and evening, which combined with RAF sorties to mean that the beaches were relatively unharassed by German aircraft that day. All of 25th Company managed to get on a variety of boats, and by three in the morning they were all off the mole, 300 of over 47,000 troops transported across the channel that day. By the middle of the morning they were in England, at Dover station, where they were greeted by Women’s Voluntary Service (WVS) workers with tea and biscuits. The sepoys asked the women:

to lend them their empty brass trays and copper buckets… [and] started playing folk lore tunes on these utensils. Our entire party joined in singing and dancing. Even the lady workers and many British spectators joined in the dance … it went on with great enthusiasm till the guard gave the warning whistle.

They were taken to a variety of military camps across the south of England, including North Camp near Aldershot, where they were welcomed by ‘Muslim Woking Mission worker, British Muslims and Indian Muslims led by KS Mahmud … with gifts for the men’. They were home, or rather, they were in their new home.